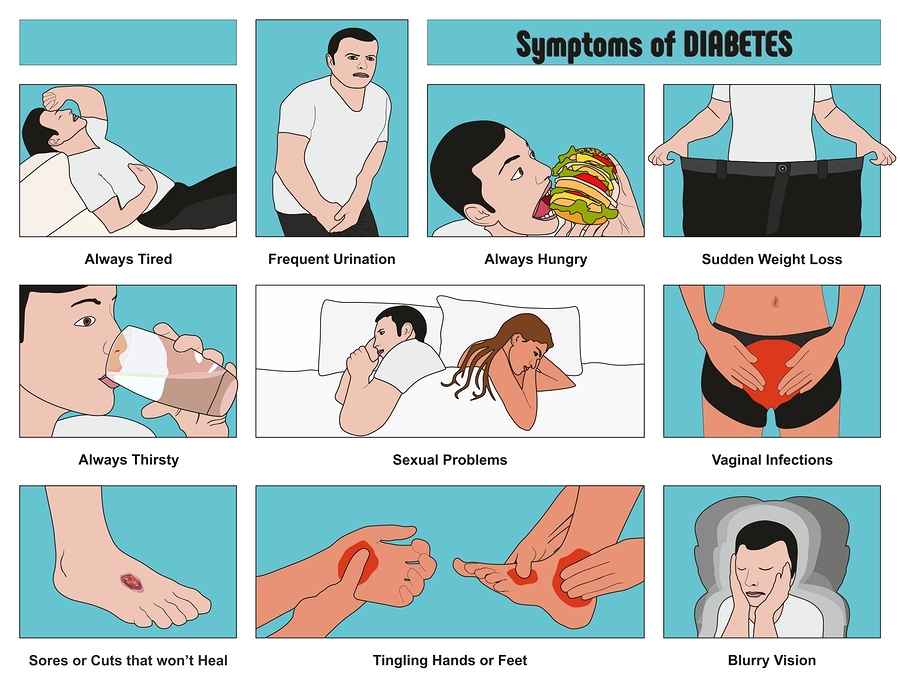 Initially, most symptoms diabetes are dismissed as being minor annoyances and are usually ignored. Of all diabetes sufferers, nearly a third doesn’t realize they have the illness since the diabetes symptoms are fairly mild and mostly unnoticeable in the beginning.  This is a problem because complications from diabetes like eye damage and nerve damage start long before many people are diagnosed and they are often irreversible.

Type I diabetes was once called juvenile diabetes since it mainly affected children and young adults. With Type 1 diabetes, the body is unable to produce insulin and the immune system typically attacks the pancreatic cells. Type one diabetics require insulin from an external source since the bodies of sufferers are unable to produce it naturally. Type one diabetics are at greater risk of developing heart disease and kidney problems, in addition, to suffering from nerve damage and problems with vision.

Common symptoms for both Type I and Type II diabetes mellitus include extreme nausea, tiredness, and increase in thirst, more frequent urination and problems with maintaining weight.

Type II diabetes mellitus is the more common form of diabetes where the symptoms are difficult to ascertain. You can live with plenty of symptoms of diabetes mellitus for a long period of time, sometimes years because they are often misdiagnosed as the natural aging process and as a result are not viewed as alarming or dangerous. Because early symptoms of diabetes can appear fairly harmless, it is important to be tested for the disease once your reach your forties.

As you can guess, gestational diabetes takes place during pregnancy. Blood sugar levels can and do fluctuate somewhat during normal pregnancies, however, it they are elevated for long periods, there may be an issue. Around 7 percent of all pregnant women develop gestational diabetes, so most women are tested for it during their second trimester. Your unborn baby can be injured and you could be at risk of miscarriage or other complications if gestational diabetes is left untreated.

Signs of gestational diabetes are similar to those of the other types of diabetes and also include recurring vaginal and urinary tract infections, extreme fatigue, nausea, greater thirst and more frequent urination. Several of the gestational diabetes symptoms are similar to typical symptoms of an ordinary pregnancy (like nausea, thirst and needing to go the bathroom constantly), so it is important to be screened for diabetes mellitus during pregnancy.

While not every symptom raises the specter of diabetes, it is important to pay attention to the risks and search out medical attention if you suspect something is not right. Diabetes is a serious disease with severe and life-threatening consequences if ignored.