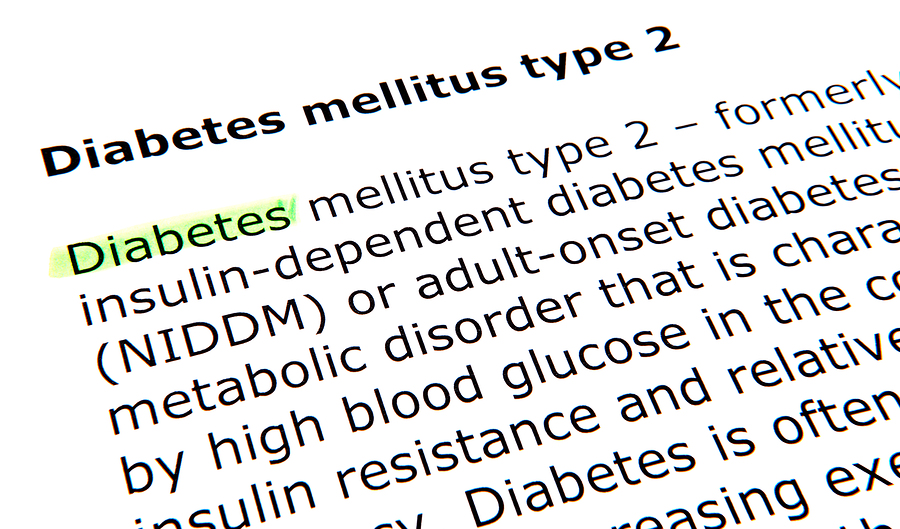 Diabetes mellitus type 2 otherwise known as Non-insulin-dependent diabetes mellitus (NIDDM) results from reduced insulin sensitivity or the inability of the pancreas to secrete insulin. It usually occurs in older adults and is the most common type of diabetes. It is progressive and patients eventually require the use of injected insulin rather than treatment with conventional drugs.

The onset of Type II diabetes or NIDDM is usually influenced by genetic and environmental factors and its prevalence is increasing worldwide (including the United States), particularly in developing countries. It also increases the risk of other diseases such as stroke, cardiovascular disease, and retinopathy.

With diabetes mellitus type 2, glucose or sugar cannot be transported into the cells due to either the inability of the pancreas to produce adequate insulin or due to a special receptor on the cell membrane that prevents insulin from binding. (Basically the cell is rejecting the insulin’s effort to bring it sugar) If insulin cannot bind to the receptor the glucose or sugar is prevented from being transported inside the cell. This leads to what is known as insulin resistance.

Insulin resistance, therefore, means that insulin is present in the body but can't be put to use. It requires higher than normal levels of circulating insulin before a normal effect can be seen. The role of leptin in Type II diabetes or NIDDM is unclear but leptin levels are found to be high with this disease. Insulin is generally known to enhance leptin production.

Resistance exercises like weight lifting, is known to reduce the effect of insulin resistance and risk of developing type II diabetes or NIDDM. Resistance exercise depletes muscle cells of stored insulin, stimulating them to ask for sugar / insulin instead of rejecting it.  When exercise begins the body increases and maintains the blood sugar levels to provide fuel for the exercising muscles.

Adrenaline is also released during exercise. It significantly increases heart rate to cope with the demand for oxygen. Adrenaline also suppresses insulin secretion so that more insulin stays in the blood stream ready for use. If the diabetic patient has high levels of insulin while exercising then the adrenaline cannot reduce the insulin levels enough. So blood sugar levels may drop too far and cause hypoglycemia. Therefore exercise may prove to be a problem for diabetic sufferers in some situations. However, it has been noted that if patients undergo an exercise regime for as little as one-week insulin sensitivity is greatly improved.

Metformin is one of the drugs often prescribed to improve insulin sensitivity and therefore treat diabetes mellitus type 2.  Metformin is given orally. Insulin sensitivity is improved so glucose use is significantly increased. Oral and injected insulin are also commonly used to treat type 2 diabetes.

It is possible to reduce the risk of developing type II diabetes or NIDDM if certain lifestyle changes are adopted. According to statistics, there are 27million people diagnosed with diabetes in the United States. Of these, 85 percent of these people have type II diabetes.

It has been estimated that over 5 percent of the healthcare budget is spent on care for type II diabetes sufferers. 10 percent of hospital budgets are spent on caring for these patients and treating the complications brought about by poor management of the disease.

Complications of diabetes mellitus include retinopathy, renal disease, cardiovascular disease, stroke and limb amputation. All of which may be delayed or prevented, freeing up bed space and reducing waiting times on hospital waiting lists.

Diabetes is on the Rise

Diabetes mellitus type 2 is most prevalent in developed countries and is increasing in others where the population is adopting a high carb and low fat western diet. Many of these developing countries are becoming more sedentary, another risk factor.  Research shows that genetic and environmental factors both play a part in the disease. However, the risk of developing type II diabetes or insulin resistance can be greatly reduced if a low carb diet and regular exercise is taken.

Regular monitoring at a physician’s office or by a natural health practitioner has a beneficial effect by encouraging patients to adopt helpful lifestyle changes and preventative measures (like minimizing their carbohydrate intake and balancing every meal with healthy proteins and fats to minimize blood sugar spikes) so they can prevent developing diabetes.